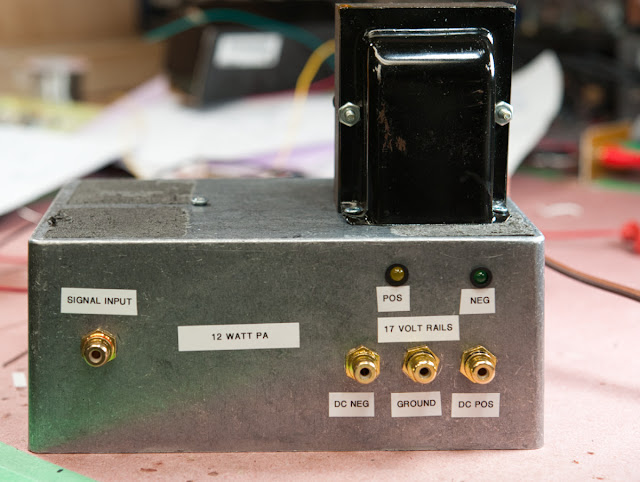 I sought a low power bench audio PA to use for guitar preamplifier development. This brick measures ~ 18 x 11 x 8 cm and delivers 12 clean Watts power into an  8 Ω load. On the front panels 3 RCA jacks provide regulated +/- 17 VDC plus a signal ground connection. Additionally, the signal input jack lies on the front panel. The rear panel sports a speaker jack, fuse and the AC mains input. 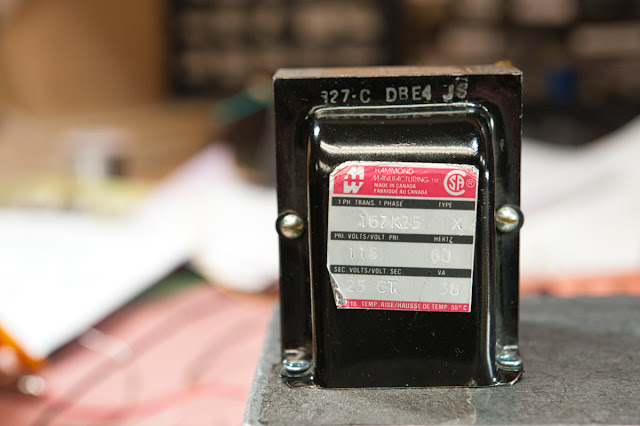 Above — A PA is built around a power supply transformer. This tall, heavy & old Hammond transformer has sat in my lab for decades: Although the label shows 25v CT, the AC voltages on each side measured 13.8 VAC under no load. Rectified and filtered this transformer provided +/- 18.89 VDC under a heavy load with no sag until pushed to the extreme. Thus it will function as a 10 -12 W guitar amp power supply — good for my purposes.

Above — The +/- 17 volt rail regulator/filter circuits. My rectifier included a full wave bridge and the main reservoir capacitors = 4700 µF.  I re-purposed The main Hammond chassis from some old project and this entire project falls under the low cost category since most of the parts were ancient specimens from my collection. 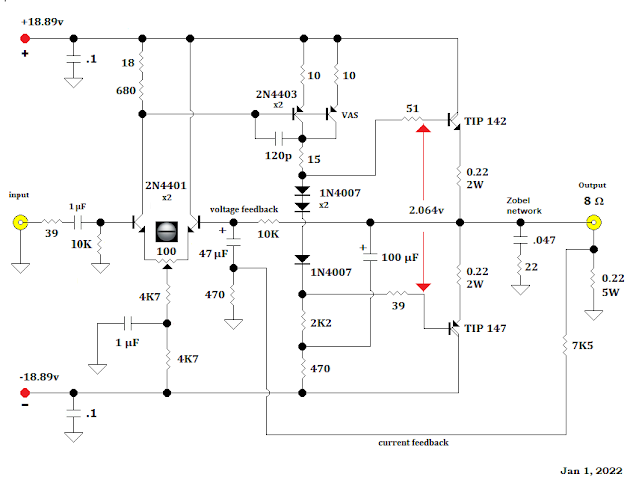 Above — Popcorn PA schematic. This is a slightly tweaked version of this Polytone-inspired PA. I recommend this PA over my original version since it offers way less distortion.

The small signal transistors = 2N4401/2N4403 - a pretty decent general purpose BJT I use from DC to HF. The input pair feature some emitter degeneration via a 100 Ω trimmer potentiometer. If you lack a trimmer pot, place a 49.9 to 68 Ω resistor on each BJT emitter instead.

I ran out of BD140s plus sought a VAS with an fT of > 150  MHz, a low Cbe and a hfe as high as possible. VAS transistor choice seems to shrink every decade. Gone are the luscious  high voltage, high current, high beta offerings from companies such as Toshiba or Sanyo. For example, the KSA1381/KSC3503 or 2SC2911/2SA1209. Yes, these are still available from online auction sellers, but they seem very expensive and the whole bootleg part worry looms heavy. The BD139-140 seem the only low cost, readily available choice for a low budget PA like mine. The BD139/140 pair specs also widely varies - and some are just garbage. I now get mine from Digi-Key and test a couple to confirm they are OK.

In the end, I placed two 2N4403 BJTs in parallel with 10 Ω current sharing resistors for the VAS. This worked OK. Guitar amps are generally not hifi amplifiers giving ultra low distortion. Some might classify as hifi, but that is the exception. I avoided current sources, driving the VAS with a emitter follower and other distortion lowering techniques.

The virtue of this PA = easy to build, easy to debug and sounds very good for the parts count. If you scratch build a complicated HiFi PA, you suffer a high probability of failure. Especially when current limiting circuitry and 2 current sources that work together with negative feedback go into your circuit. Often enough, your first sign something is wrong comes in the form of smoke; and by the time you figure out why, you may have destroyed some parts. 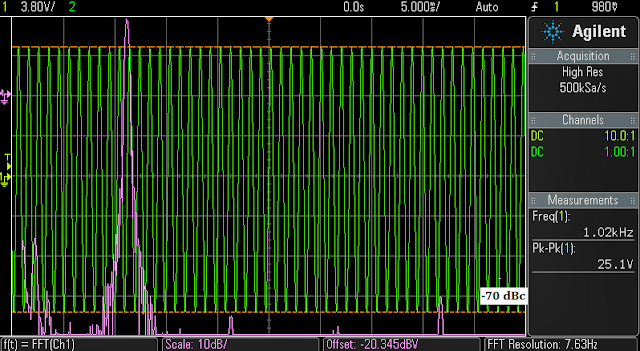 Above — FFT of the Popcorn PA. All harmonics are down at least 70 dBc. I tweaked the input pair 100 Ω trimmer to crush the second harmonic. Some of this spurious output comes from IMD in the TIP142/147 pair. In a PA, distortion can arise from many points along the signal path. I'm quite happy how this particular PA turned out.

Across the base inputs of the Darlington final pairs, I measured 2.064 VDC. Three rectifier diodes seemed to eliminate any detectable crossover distortion ( a dominant source of distortion in many PAs).

If you listen to a  guitar amp that lacks enough forward PA base bias and suffers crossover distortion, you'll hear a faint, fuzzy sideband sound along with your main guitar sound. You really hear this when playing single, sustained note phrases. This popcorn PA sounds clean & punchy with no hum except with single coil pickups. 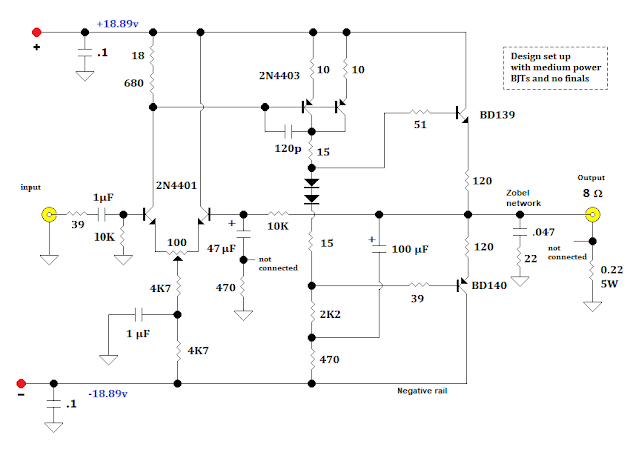 Above — I built this version of my PA first. The BD-139/140 emitters get 120 Ω resistors so they don't need a heat sink and hopefully won't burn up if I made a mistake. I measured DC voltages, calculated current by voltage drops across selected resistors — and also tested it with a signal generator and dummy load. Only 2 diodes drops are needed to properly bias the BD139/140 pair.

With the amp working well, I then pulled the BD139/140 off the main board and wired up the chassis mounted TIP142/147 after adding 1 more diode to set the correct PA idling base bias. Finally, I added the current feedback loop. I chose the 7K5 Ω resistor during listening tests. 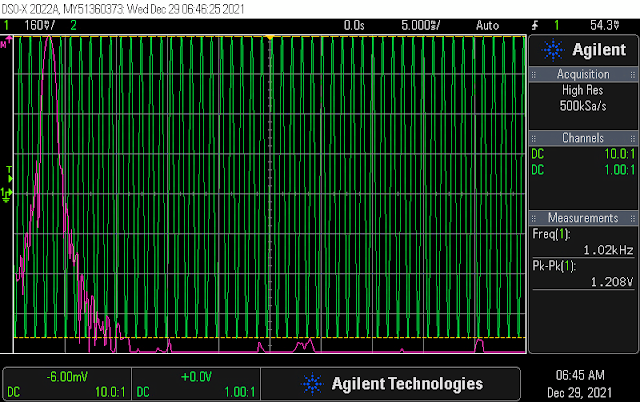 Above — FFT of the circuit shown in the schematic above (with the BD139/140). The distortion is about as low as I can measure with my DSO. All that is needed = a set of complimentary finals and a good PA might arise. A decent LoFi popcorn PA for guitar amps. 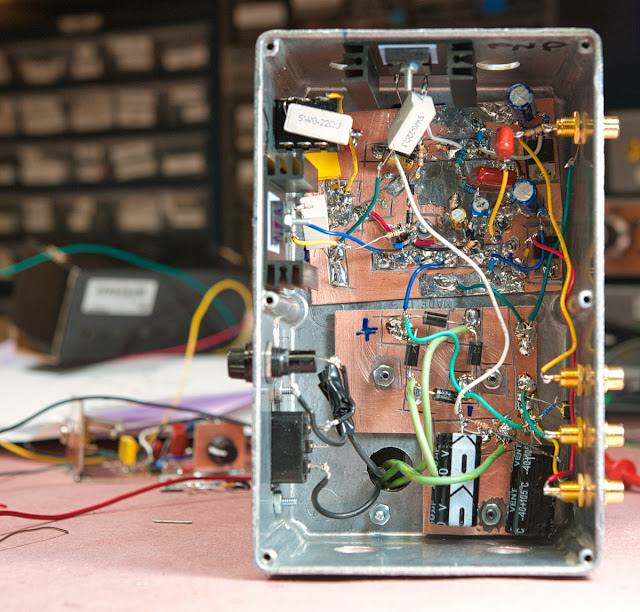 Above — The "brick". The Popcorn PA lies on 2 boards with carved islands for the positive, negative and 0 volt rails - and to anchor the rectifier diodes. After taking this photo, I screwed on the cover plate to seal it for safety against the pile of wires and other mess on my bench. This amp is not connected to AC mains unless I am using it and does not have an on/off switch since all my audio test equipment goes on a dedicated switched AC mains power bar.

Above — Rear view of the Popcorn PA. I'll start work on my next preamplifier circuit tomorrow and audio test it using this PA. I really like the small bench footprint this brick offers. I place the preamp circuit just in front of the brick and have small cables built for the 17 volt rails and input.

Posted by Vasily Ivanenko at 22:02