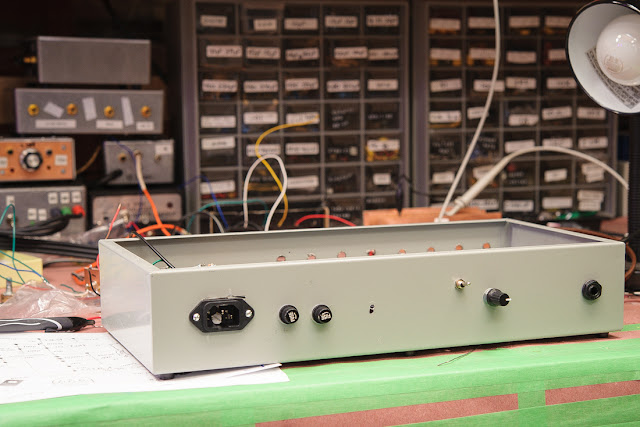 Greetings! I purchased a chassis to hold a power supply, a power amp and future preamplifiers. I drilled a bunch of holes for potentiometers, switches, plus 2 inputs and 1 output.  I'll use this basic experimenters platform in my lab and blog about my results over time.

My goal is to explore solid stage guitar amp preamp and tone shaping designs for clean, jazz guitar purposes. My aluminum chassis is strong & large to avoids the pains of working in a cramped box.

I've cut enough holes for 2 separate preamplifer stages to allow A - B comparisons of 2 different preamp or tone shaping circuits. Today, I'll blog about the power supply, power amp and 1 simple preamp stage — this will set the table for future, specific, component-level experiments. 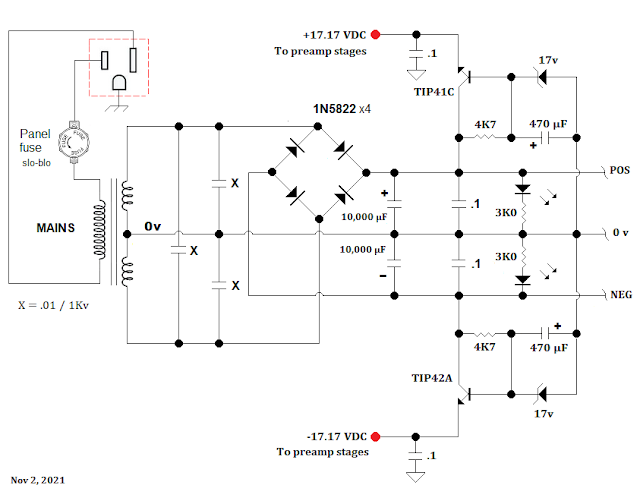 Above — The simple split power supply.

I had 4 usable transformers in my collection and the first 1 applied was fried. I replaced that with a lighter +/-18 VAC output  transformer purchased on eBay last year. To my delight, the no load DC output measured +/- 26.7 VDC.  A zener diode regulated portion sits on each rail for the preamplifier op-amps and JFET/BJT amps. Choosing +/-17 VDC garners maximum headroom and dynamic range from op-amps.

I went into great detail about guitar amp DC power supplies here and won't repeat myself.

This platform features no power switch since it gets connected to an AC power bar with an integral switch — this guitar amp only sees AC mains power when in use. 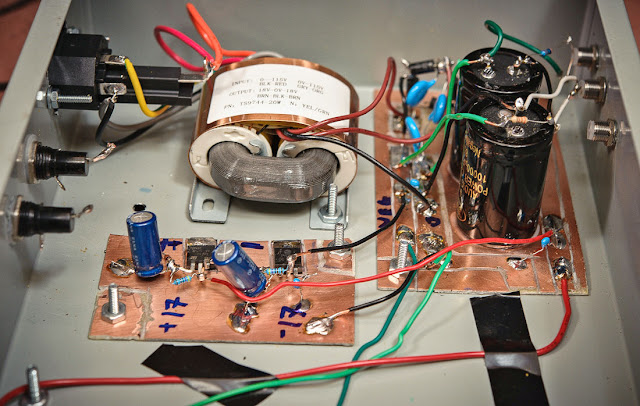 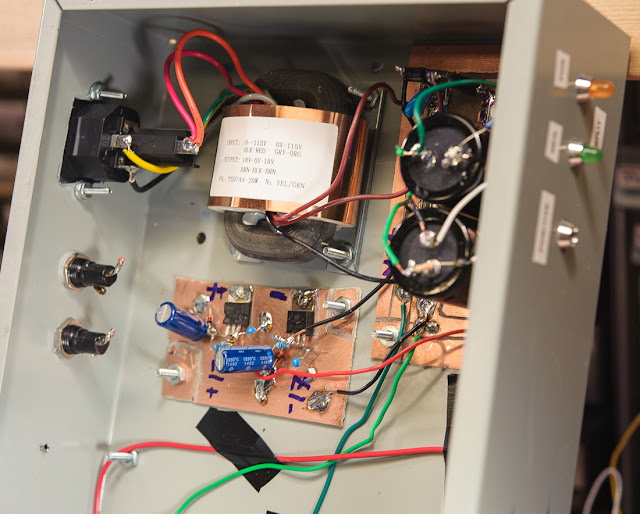 Above — 2 photographs of the power supply mounted in the chassis. The 2 rear panel mount fuses are not currently in use. The panel mount IEC320 C14 receptacle features a built in 20 mm fuse holder. I've got a 2 Amp slow blow fuse inside.

Each rail is "monitored" by a separate front panel LED. This proves handy. If you shunt or short a rail, the corresponding LED will dim or turn off respectively.  If your amp goes into oscillation, 1 or both LEDs will flicker at the oscillation frequency.

Only a 10 Watt or so PA is needed for an experimenters platform. This nicely keeps the weight  (from the transformer) down. Additionally, 10 Watts seems about perfect for a practice amp. I know enough guitarists with hearing impairment to feel some concern about this topic.

I built 3 PA's but eventually settled on a simple design that boasts only 5 transistors. I took the PA from the Polytone model 100, 101, 102 and perhaps others and modified it so it makes less harmonic distortion. I love this PA for its simplicity: 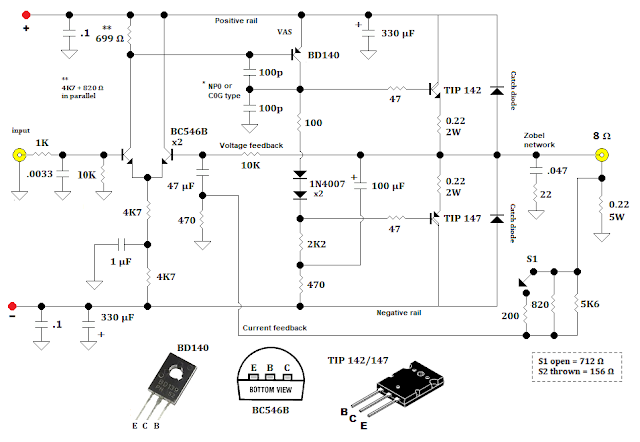 The first change included replacing the original Sziklai pair with a standard Darlington pair in the form of the TIP 142 and 147 complimentary power followers. These husky 10A TIP transistors prove tough and stable in my low power guitar amp. Mine have SOT-23 cases.

To drive these transistors the BD 140 voltage amp or VAS runs 9.8 mA quiescent emitter current. Rather than going with an adjustable bias for the power followers, a simpler 2 diode scheme works fine and crossover distortion is acceptably low. The DC voltage difference across the TIP 142/147 bases = 1.44 V.  Adding a 47 µF capacitor across the 2 biasing diodes did not reduce crossover distortion.

I replaced the original 470 Ω collector on the input BJT differential input pair with a 1K potentiometer and tweaked the pot for the lowest possible distortion while viewing an FFT in my digital oscilloscope. After locating the sweet spot, I removed the pot and measured 699 Ω. This resistance was nearly achieved with a 4K7 in parallel with an 820 R. I stuck that into the circuit. With that amp set to maximum clean power into a dummy load changing resistor from 470 to 699 Ω lowered the amps distortion profile significantly.

The 100 pF capacitors arrangement in the Polytone was supplanted by that shown. A 100 pF collector cap shunt to ground (instead of to the 0 volt rail) plus another from collector to base stabilized this amp.

Although 1N4007 rectifier catch diodes were added to clamp any back EMF spikes caused by changes from the inductive load of a speaker, I added no PA current limiting circuitry.  For a 12 Watt experimenters amp, this seems OK.  With all power amps, overbuild them with parts that can stand some current; the only TO-92 transistors in the whole PA = the differential pair. 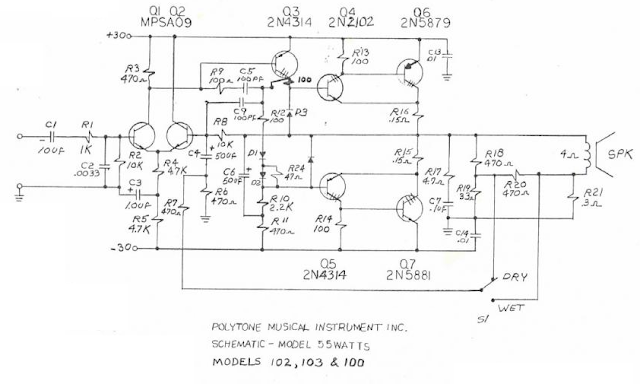 Above — The original Polytone PA that served as the basis for my power amp.

I liked the switchable "dry or wet" current feedback selector switch on old 1970's Polytones.
During listening tests, another version arose: a series 712 or 156 Ω which varies the midrange response heard in the speaker.
For my forthcoming experiments, I'm using 2 Jensen 8 Ω speakers:  a C12N or a C10R mounted in the same open back cabinet (using either 1 speaker or the other). I tested my switched feedback resistor values listening to these particular speakers while playing guitar and recommend doing this to anyone making a guitar amp. Find your current feedback resistor mojo to suit your guitar(s) and particular speaker(s). 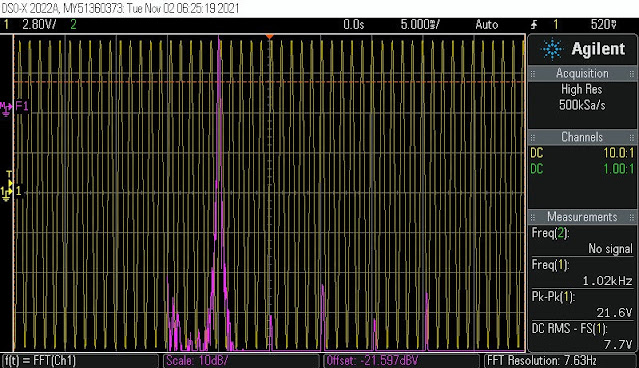 Above — An FFT of my PA with a 1 KHz signal injected in the input and a dummy load serving as an output. Each vertical graticule is 10 dB. The third harmonic seems to be from crossover distortion and imbalances in the input pair — and also from the finals.

To get the 3rd harmonic down another perhaps 5-6 dB, I would have install an active current source for the input pair, add 68-100 Ω  degeneration to the input pair emitters, use separate emitter followers for the driver and final PA transistor, and change the 2 diode PA biasing to an adjustable "amplified diode" using a BJT plus a pot. Thus, the once simple Polytone amp now resembles a classic HiFi amplifier like I would build for a home audio PA. 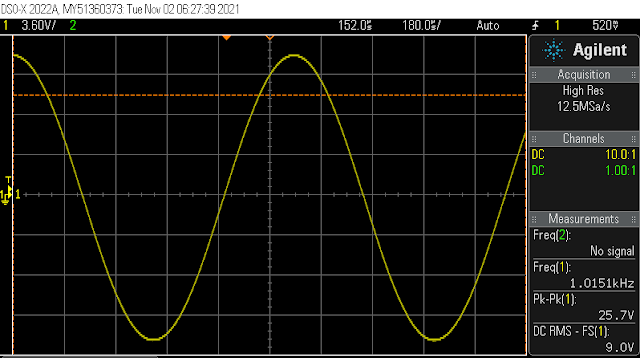 Above — The nice looking sine wave in my DSO (time domain). I can not see any crossover distortion in this screen capture and while zooming in live on my DSO.

Still, though, the distortion in my original Model 102 version looked much worse. The modified version dropped the 2nd plus odd order harmonics down ~15 dB @ 12 Watts power compared to the original.  My current version proves a simple, easy-to-build, inexpensive, 5 transistor PA that sounds great during listening tests.

Beyond the tube versus transistor debate, you might argue that classic, beloved guitar amplifiers were highly non-linear from input to output.  The tendency of solid state amp builders to make their amplifiers ultra linear by using extensive local and wide area feedback circuitry and über perfect input stage balance perhaps makes them sound a bit sterile.  Warts and all, that's my PA. 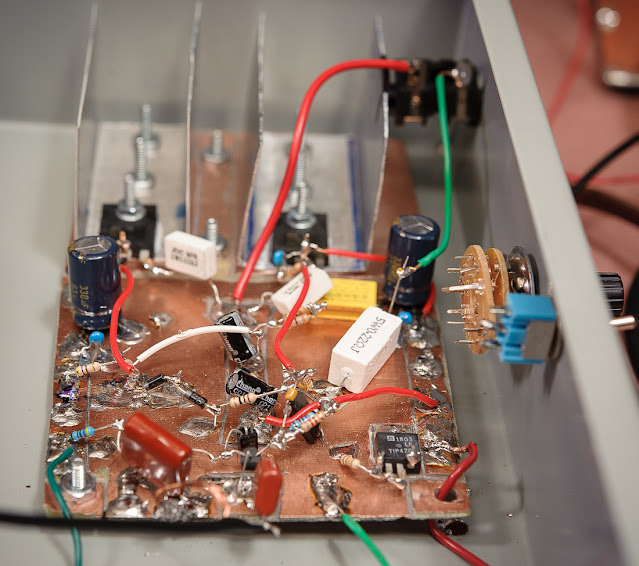 Above — The final PA mounted in the chassis.

The board looks little messy from the previous 2 PAs built into it. On the right foreground, you may view the TIP42C BJT formerly used as a current source and now disconnected. I fashioned heat sinks from some bent aluminum sheet metal. The entire PA board is isolated from the chassis by cutting islands around the mounting bolts. At this point, the current feedback switch S1 (seen on the right panel) was not in use. Another panel 4 SPST multi-selector switch sits in the chassis in case that is needed in the experiments ahead. 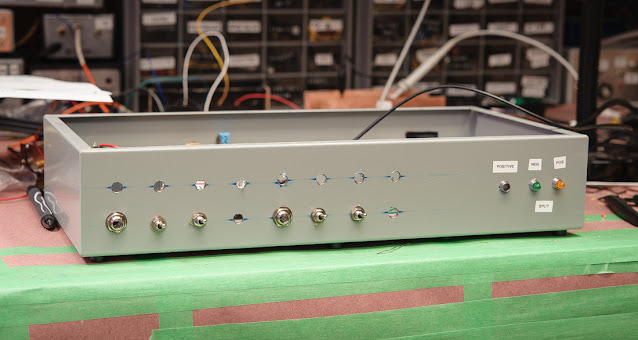 Above — Front of the chassis with 2 input jacks and 4 switches mounted in situ. A third LED slot on the right is open in case an LED indicator is needed for future experiments with preamp and tone shaping circuitry. 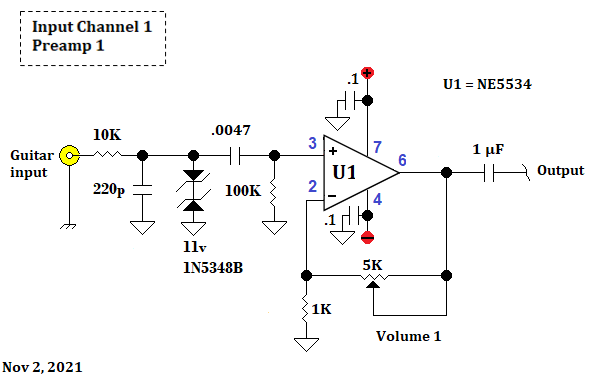 It's a great experience to listen to an amp with no tone controls.  I enjoyed playing through this amp for a few nights and even though preamp maximal gain ranks low, it's already a loud, small room practice amp.

Now I have a base platform for preamp and tone control circuitry experiments to blog about.

My guitar-related index is here

Posted by Vasily Ivanenko at 14:13