In 2011, I made a 1 transistor regenerative receiver that I called the Stupid Simple. I ran a single BJT ---  with just enough bias to barely turn it on. To date, I've never built or measured a regenerative detector with higher AF output voltage.

Remembering the sublime sensitivity of this little bipolar gem, I set out to make a DC receiver for the CW + SSB 40M band with only discrete, junk box parts --- plus running as little current as possible.

I may write up a formal blog post with some measures when I make a presentable version of Trixie 2  ---- but until then, here's the raw bench version -- something I've never shown before.

Despite its simplicity, I spent many hours trying to make this radio sound decent. You can't make a silk purse from a sow's ear, but I really love this little receiver and enjoy its performance versus detector current (and cost) factor. 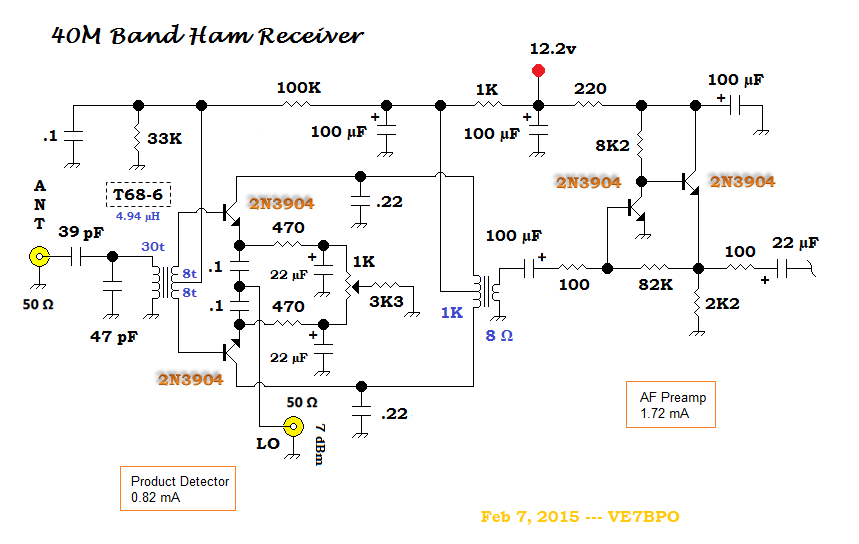 Above — Trixie 2 front-end end AF preamp schematic. The entire stage current draw = 2.54 mA. A 1K2:8 Ω or 1K:8 Ω AF transformer with 0.22 µF HF bypass on the high impedance side provides the only serious low-pass filtering of the output AF. The 0.22 µF caps may be decreased to as low as 0.1µF to preserve sibiliance -- but this also boosts noise.

The 39 pF cap matches the transformer to a nominal 50 Ω antenna input. You may wish to replace the 47 pF cap with a trimmer, however, it tunes the bottom 200 KHz of the 40M band OK.

I ran an available LO power of 7 dBm from my homebrew signal generator. In the old site archive it's shown on a page called VFO 2011.

The optimal LO drive is best determined by the builder. 5 - 7 dBm works OK and you may wish to experiment to find the best LO drive in your need to balance mixer harmonic cancellation, versus sensitivity, versus suppressing AM detection.

If you match 2 transistors for DC beta at a similar collector current you can omit the 1K balance control, however, why bother?

You'll hear the delicious din and chatter of multiple AF products from both sidebands. Normally, we low-pass filter the AF channel -- or perhaps cancel the opposite sideband with phase shift circuitry ; but not in Trixie 2.


I actually enjoy the visceral sound of raw product detector AF output since it makes me think about mixer function and how to best design and tweak AF circuits in more robust receiver designs such as the R2 by Rick, KK7B.

I've detected 0 hum and no local broadcast band AM radio. Despite the balance control and transformers, Trixie 2 will tune in and detect AM SWL stations, however, for the most part, they lie way in the background and even a strong carrier disappears 3-4 Hz away from center frequency. 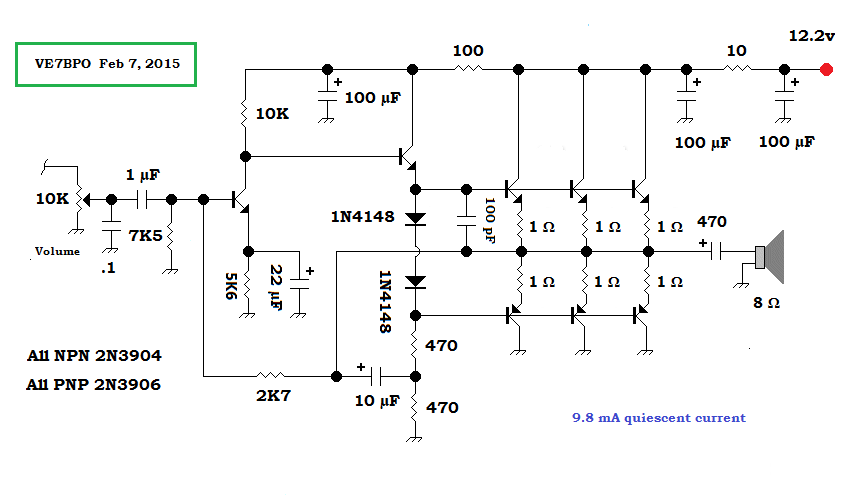 Above — Trixie 2 AF power amp. The key to solid, linear AF voltage amp design = feedback. Anyone can run some voltage amps together to build up the AF signal --- but doing this with low distortion takes finesse and measurement -- I hope to get better at it over time.

Only 1 voltage amp is required in the Trixie 2 PA. To keep the quiescent current down, I ran 3 power followers in parallel to obtain a clean maximum average power of 335 mW. This keeps the audio signal clean on peaks when listening at reasonable loudness. With parallel followers, you only need 2 diode drops to forward bias them into A/B and this keeps the quiescent current down.

I also made a headphone version of this amp --- you can only run 1 or 2 pairs of followers and further can raise the 470 Ω resistors on the emitter follower to drop quiescent current.

In a battery powered version, I might apply another 1K:8 Ω collector transformer and run a single transistor amplifier for the AF PA. 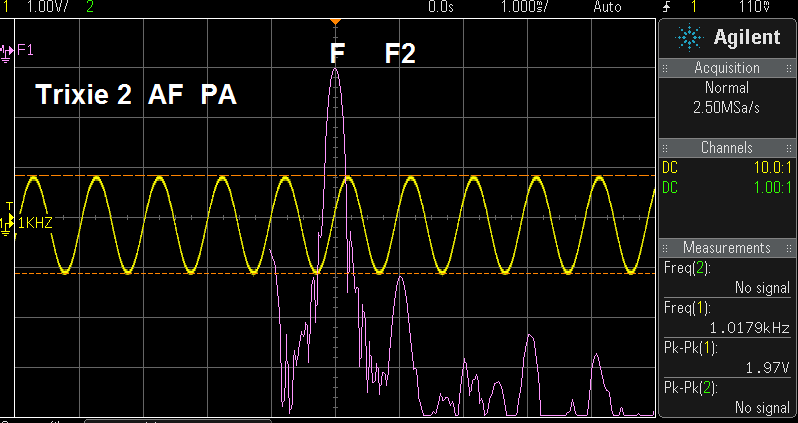 Above —FFT of the AF power stage at ~~1/2 maximum average power. The second harmonic is 43 dB down. Not great, but good enough for a bare bones receiver like Trixie 2. You can boost the distortion performance by running more feedback and increasing the current through the emitter follower. For example, drop the 470R resistors to 330 or 220 Ω.

Below — 1 good way to real-world test a receiver is to tune in an around a CW pile up. This often represents the worse case for a receiver since some of the guys are likely to run power.  A DPDT switch with an in or out 14 dB attenuator pad on the antenna input proves invaluable to low IMD product detectors.

My video gear, lighting and technique sucks and my camera microphone circuit is clipping some of the peaks!  Warts and all.. 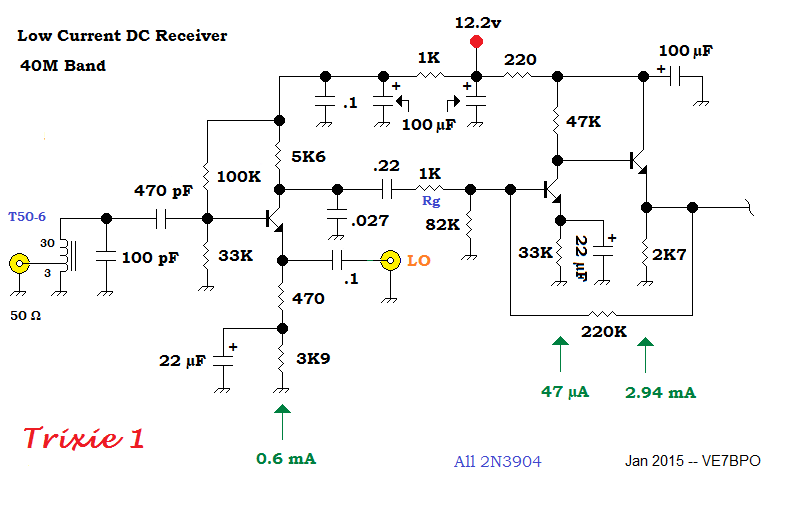 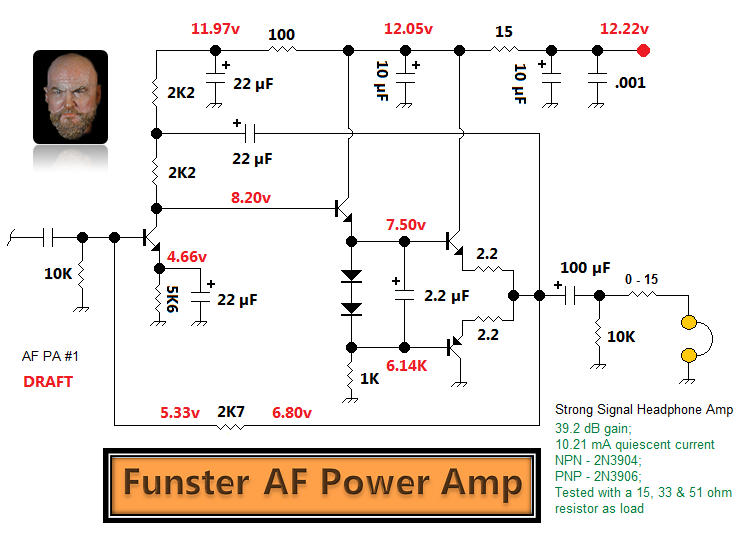 Above —The prototype of my AF power stage.  In 1995, Wes taught me to always take a circuit that you know works OK and then alter it. That's what I did when designing the AF power amp --- wise words.

Simple circuit design yields great fun and less-than-usual parts wastage during prototyping. I plan to evolve Trixie 2 into something for the trail.

Posted by Vasily Ivanenko at 20:48